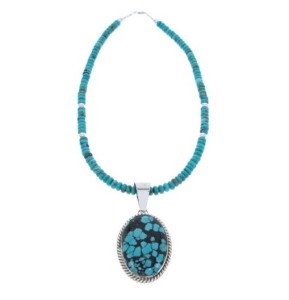 The Social Significance of Navajo Necklaces

When most people think about the lovely turquoise set in silver that has come to typify Navajo necklaces and other jewelry in modern American culture, they are often unaware of the history behind the beauty. The tradition of native jewelry making goes back hundreds of years to a time before colonists had yet reached the shores of the New World.

The Navajo tribe of peoples already had a rich culture whose traditions were steeped in history and necessity. Among them was the tradition of creating ornate jewelry. Navajo necklaces, among other pieces, were considered a measure of affluence among their people. Those with the most ornate details and stones were of important social status and highly respected in the community.

The History of Silver in Navajo Necklaces

It was difficult living in the rough American southwest and danger just as often presented itself in the form of other tribes of people as it did from the natural world. Warfare was an unfortunate reality of the time and much of the metals that were common to making Navajo necklaces came from the spoils of conquest. It wasn’t until trade relations were opened with the Pueblo peoples, and later when the Spanish colonists arrived via Mexico that Navajo necklaces were made using the silver that we associate with their jewelry as their primary metal.

The Spanish taught them the art of silversmithing, and Navajo necklaces were often made from coins and other bits of silver traded for with the colonists. In this way the story of Navajo jewelry is as much a product of westward expansionism as it is of the clear talent of their craftsman.

The Significance of Turquoise in Navajo Necklaces

That Navajos became some of the world’s finest silversmiths is undebatable. Their precision and patience behind the forge is a testament to their culture. However, silver is only half the story. Those lovely pieces of turquoise are just as much a part of the cultural significance of Navajo necklaces as any metal. Turquoise is among the most important stones to the Navajo. The mineral’s light blue to green tinted complexion must have stood out dramatically from the wash of oranges and reds that make up the landscape in the deserts of the American southwest.

In part because of this, the mineral was seen as being set apart from the natural rock formations and was believed to have rained down from the heavens. Although we typically think of Turquoise in its polished form when we envision the typical Navajo Necklace, it was just as often left in its natural state or even cut into ornate patterns. Wearing this bright blue rock signified a special place in the tribe and a person wearing such a Navajo necklace this was to be respected.

Being a people in close contact the elements, the people naturally took much of their artistic inspiration from the land and animals around them when creating Navajo necklaces. Among the pendants and clasps common to jewelry making, a Navajo Necklace called the Naja is a great example of this. The bead work and stone settings are forged in an organic form, the strands forming an upside down “U” shape at the bottom. This form is suggestive of a scorpion or spider that would have been a common sight to their peoples and, in fact, such Navajo necklaces are often called spider necklaces. In this way, their hard won skills as craftsman, silversmiths and stone setters finds its completion by borrowing from the splendor of the natural world to make those lovely Navajo necklaces.